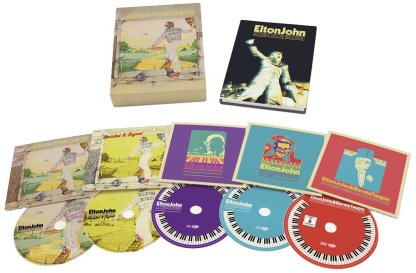 You know that rare moment when an album makes an impact so great, not only do you never forget it, but manage to remember every word to every song throughout the remainder of your life? Elton John’s Goodbye Yellow Brick Road is that album for me.

Although it’s been 41 years since Elton John released his seminal double LP, this classic album has been revisited and reissued as a super deluxe, 5-disc ultimate edition to commemorate its 40th anniversary. I’ll admit I was a bit skeptical about another remaster (as this is not the first time GYBR has been cleaned up), but this is truly the best this album has ever sounded. I’ve probably listened to this record hundreds of times, and I can honestly say this new remaster brings out new details and a clarity like I’ve never before heard. If this is one of your favorite Elton albums, you owe it to yourself to own this, as it is without a doubt the definitive version.

With its iconic cover and sales of over 31 million copies to date, Goodbye Yellow Brick Road is Elton John’s best-selling studio album and considered by many to be his landmark, career-defining masterpiece. The 17-track set includes many of John’s most famous songs, including: “Bennie and the Jets,” “Saturday Night’s Alright for Fighting,” “Candle in the Wind,” and the hit title track.