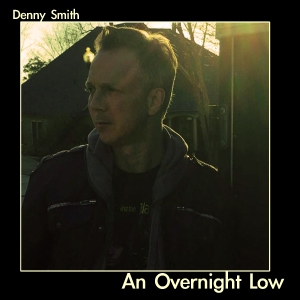 Denny Smith, the captivating frontman of rock band The Great Affairs has finally delivered his first solo album, An Overnight Low. Smith’s 12-track record contains exactly what fans have been hoping for; hook-heavy no frills rock and a healthy dose of contemplative ballads.

Written and produced by Smith himself, An Overnight Low shows the singer-songwriter in a new light from his previous band efforts. The gorgeous “Leaving L.A.” is a cinematic love letter to the City of Angels, while the infectious “Hard Stop” is the kind of romantic rocker made for blasting from rooftops and car windows when needing a break away from the insanity of the world.

For those not yet familiar with Denny Smith, his style can best be described as a stirring fusion of Tom Petty and Jon Bon Jovi, with a dash of the Stereophonics’ Kelly Jones. For fans of the aforementioned, An Overnight Low is the album you didn’t know you’ve been impatiently awaiting.

Upon repeated listening sessions of Smith’s introspective solo album, I found myself pondering the answers to a handful of questions, which he was kind enough to take time out of his busy schedule to answer. I’ve posted his comments below to give listeners some additional insight into the making of An Overnight Low.

A brief Q&A with Denny Smith:

Popmartzoo: What made you decide to make a solo record now?

Denny Smith: Truthfully, I was prodded by my drummer in The Great Affairs, Kenny Wright. We’d done a run of shows in South Carolina, and on a very long overnight drive back to Nashville, during which the subject of what OUR next record might look like came up, I offered the opinion that I thought maybe we should do a very lean, straight up rock n’ roll thing, designed specifically for the stage….one we could pull off in its entirety live if we chose to, with no auxiliary players or backing tracks. We’d run into some difficulty recreating a few of the songs from our last release, and I hated that a lot of the benchwarmers were my favorite tunes, so I really wanted to strip back the overdubs and make a Rock N’ Roll Over rather than a Destroyer this time around, to put it in KISS terms.

The problem with that concept was my tendency to write mostly pop stuff, ballads, and moodier pieces that didn’t really qualify with those specs. I was effectively pushing for an agenda that would leave the majority of my input on the cutting room floor. So, as we passed through Atlanta, listening to a handful of the demo tracks I’d been working on, Kenny suggested I take the time to do a record of my own on the side. It took me a minute to warm up to the idea of sticking my neck out on something like that, but once I weeded through the material, and realized I was gonna get to play a lot more guitar than I normally would on a record, it started to feel more like something that was probably a little overdue.

Popmartzoo: Which is your favorite track?

Denny Smith: “Fall To Me” is one I’m really close to. It was the last thing I wrote before we started work on the album. I’d had a pretty rough past few months at the time, just dealing with some personal things, and I’d seen some friends going through a lot of what I felt was undeserved hardship too, so I think I channeled all of it into that lyric.

Also, just listening to the band play on that one is so cool. They elevated this crummy little acoustic demo in a way I couldn’t have possibly imagined when I handed it off to them. Michael Webb’s piano parts are so amazing that I honestly got a little choked up the first time I heard a mix. It’s also the only track where I gave up my stranglehold on the guitar-playing responsibilities, and had my engineer/co-producer Michael Saint-Leon do his best George Harrison impression. His slide playing on there is something I couldn’t have conjured on my own with a million takes.

Popmartzoo: How did the recording process differ this time from previous group efforts?

Denny Smith: No rehearsals. Normally, my band would spend months writing, arranging, and rehearsing this stuff in a practice room somewhere, but this time I cut 12 demos at home, and emailed them to the rhythm section, Dave Webb and Criss Cheatham, and they showed up at the studio on the appointed date, with charts in hand, ready to work. Of those 12 songs, they both played on 10 of them, and we were in and out of the studio with finished takes in 2 days. Total pros. Oh yeah, and all the invoices were made out to me. THAT was a difference I didn’t celebrate.

Popmartzoo: Do you still feel passionate about making music or has it become more of a job?

Denny Smith: I don’t always get paid enough to consider it a job. In all seriousness though, it IS becoming a struggle for me to get in the van sometimes. We’ve been very fortunate to have found a good handful of venues who will pay us to play nothing but our own material(or whatever obscure covers we might feel like throwing in on any given night), but a lot of people are so apathetic, glued to their phones, lost in some app. that puts whiskers on the selfie they just took in the john, or whatnot, that trying to engage a room with a bunch of tunes they’ve never heard before or already feel somewhat invested in is just a losing battle a lot of the time. Occasionally we get lucky, and stumble upon an oasis of warm bodies that still wanna be moved by music, but those occurrences are fewer and farther between I’m afraid.

That said, I don’t think I’ll ever get tired of writing songs or making records. I’m just not sure I’ll always be able to AFFORD to make them to my standards or release them at the level I’ve been able to for the past several years. It’s still a business after all, if you’re gonna go to the trouble of spending money creating something, giving it a name, and running it up the flagpole for people to judge. I’m usually just happy breaking even, but that’s a taller order than you’d think these days.

Popmartzoo: How has making music changed for you in the digital age?

Denny Smith: It’s made so much more possible. I can always sing in tune for instance, if I so choose…. but I try to do that unassisted as often as I can manage.

It also totally allowed me to work at my own pace on ‘An Overnight Low’. I took the rough mixes of our initial sessions home with me, where I was able to throw up some amplifiers, run a few lines down the hall, and cut the bulk of the guitars on my own…taking as many passes at a part as my aging iMac would allow between system crashes. I did my own string sections, flew in parts from the original demos that I couldn’t see myself getting a better performance of, and even did my own album art. I used to have to farm all that labor out, but the digital realm has made being a DIY operator one more never-ending learning curve that’s well worth the effort to tackle. I’m hoping the few corners it lets me cut will allow me to keep doing this a while longer.

Popmartzoo: What tips do have for new artists trying to navigate the music business in the digital age?

Denny Smith: See above. Learn to do as much for yourself as you possibly can, but try to know when you’re selling the art short by doing critical work that you might be under-qualified for. For example, I know I need a good engineer to man the board when I cut vocals, because I don’t 100% trust my judgement when it comes to pitch. Sometimes you need a second opinion, a better caliber of gear, or a trained eye/ear to turn out a quality product. If that’s your goal, you’ll need to be objective in assessing whether or not you’re the guy/gal for the job. “Jack of all trades, master of none” is fine if you don’t mind not excelling at anything, but it probably won’t bode well for any particular career you might aspire to. Just my 2 cents.

Popmartzoo: What do you want listeners to take away from this album?

Denny Smith: The same thing I hope every time I make one of these: that people will find one or more of these songs resonates with them personally. I don’t write about anything terribly abstract, I’m pretty common when it comes to my daily concerns, and what gets distilled into lyric form. I’ve probably got some variation of the same problems you’ve got, just on a different day… the same frustrations, fears, dreams, failings…and we all wanna connect. I hope folks will listen hard enough to actually hear. It might not be “Blowin’ In the Wind,” but it ain’t “Pour Some Sugar on Me” either. There’s stuff going on in there.

Popmartzoo: What’s next for you?

Denny Smith: The Great Affairs have a covers EP that’s almost finished, and we’ve started work on a mess of new songs that could conceivably turn into that rock n’ roll opus that kicked off this whole solo record nonsense. I’ve also got just about enough stuff to make another one of these, assuming this one sells enough CDs, downloads, and streams to warrant the effort. I sure hope so, ’cause I kinda enjoyed myself.

For more info on Denny Smith and The Great Affairs, go to: DennySmithMusic.com