Next year marks the 30th anniversary of Erasure’s fifth studio album, Chorus, but the good news is you don’t have wait until then to start celebrating and revisiting its magnificence as it has just been released in an exquisite newly remastered and expanded version. Vince Clarke and Andy Bell’s 1991 work of genius features hit singles: “Love to Hate You,” “Breath of Life,” “Am I Right?” and the sparkling title track.

This deluxe edition 3CD edition includes the original album, as well as a second disc of remixes, demo versions, U.S. mixes and six phenomenal B-Sides. A third disc contains live versions of the complete album from Erasure’s renowned Phantasmagorical Entertainment shows recorded in 1992 at the Apollo in Manchester, England.

Erasure’s Chorus was a #1 album in the UK upon its original release in 1991 and it has now been digitally remastered and sounds shiny and new all over again. Upon reflection, I find myself enjoying this album more than I did initially. The high-caliber B-Sides really complete the picture of the original album and hold up as well as anything included on the proper track list, especially the bouncy “Over the Rainbow,” the danceable “Waiting for Sex” and the downhearted but optimistic “Let It Flow.”

Produced by Martyn Phillips (Swing Out Sister, Lisa Stansfield) and mixed by Dave Bascombe (Tears For Fears, Depeche Mode), Chorus is an essential entry in Erasure’s sizable catalog and now this must-have deluxe edition makes it more vital than ever. 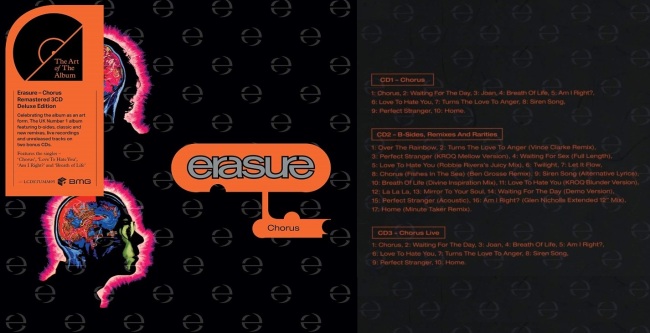