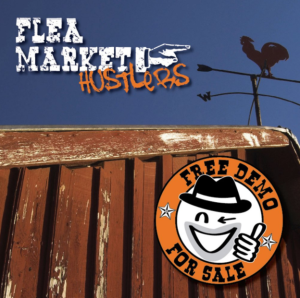 Flea Market Hustlers has been sharing its brand of country-flavored bluegrass with Murfreesboro audiences and satisfying their fans’ musical fix with their weekly shows for the past four years. By playing local venues such as The Blue Rooster and Mellow Mushroom, the band has built a local following with their unique and inventive interpretations of cover songs as well as their own originals.

The five-piece group delivers a brief but accurate sample of what they have to offer during their live performances on their seven-track EP, Free Demo For Sale. This self-produced mini-album was recorded at The Chicken Ranch in Bradyville and features three of the band’s originals along with four diverse cover tunes, which are all delivered in its distinctive jam-grass style.

The group slams through the brief set beginning with “Drive,” which was written by lead singer David Preston. This standout track includes an incredibly catchy chorus that seeps into the listener’s long-term memory and refuses to let go. The collection also includes such interesting choices as Black Sabbath’s “Sweet Leaf,” which includes a very nice saxophone solo, and late country-folk artist Townes Van Zandt’s “Waiting Around to Die.”

The Hustlers are even bold enough to attempt a remake of Culture Club’s “Karma Chameleon” with mixed success. While the song choice would seem to be a likely fit, the chorus suffers from the rapid-fire tempo, although the excellent harmonica playing included here works brilliantly.

Throughout this oddly eclectic and disparate mix of material, band member John Furbush’s exquisite mandolin playing is especially noteworthy. Even if country or bluegrass is not your usual cup of tea, this collection is worth checking out for the highly enjoyable take on Queen’s “Fat Bottomed Girls.” Whether consciously deciding to save this pure delight for last was intentional or not, Flea Market Hustlers deserve a big “two thumbs up” for choosing to include this number. Their excellent reworking and masterful delivery of this familiar rock song was nothing short of genius.