Back in the summer of 1979, Donna Summer reached the peak of her zenith with her double album, Bad Girls. Considered her career milestone, the masterfully crafted double platter dominated radio airwaves, filled night club dance floors and livened up countless living room parties.

Now, Summer’s career-defining masterwork is being celebrated with a special 40th anniversary vinyl edition. This is the first time this best-selling classic has been reissued on vinyl since its original release in 1979. The new reissue was released on July 26th and is available as a double LP gatefold pressed on 180-gram vinyl. This collector’s edition also features the vinyl debut of the demo version of the album’s title track as an exclusive bonus, making this the perfect opportunity the relive the magical vinyl experience of Donna Summer’s Bad Girls all over again. So, dim all the lights and take a musical journey into the center of the heart of one of the most captivating classic dance albums of all time. [Read full article] 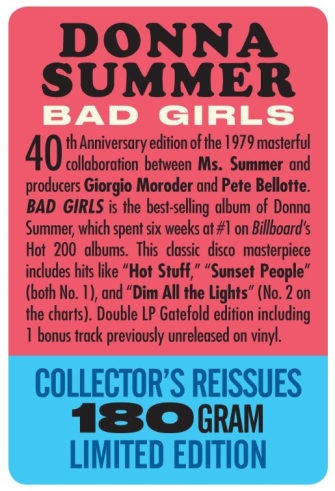