Trick or treat? It may be Halloween, but it’s no trick that The Go-Go’s were officially inducted into the Rock and Roll Hall of Fame last night, marking a milestone not only in the band’s career, but also in the museum’s history as well. The Go-Go’s are the first and only female rock band to be inducted into the historic RRHOF, marking yet another first of many firsts in the fearless fivesome’s four decades of music and mischief.

The Go-Go’s remain the first and only all-female rock band to score a multi-platinum debut album written and performed by women to land atop the Billboard 200 album chart. Like Drew Barrymore stated in her induction speech at last night’s ceremony, The Go-Go’s were also my first favorite rock band/group, as well as my very first rock concert and also the unknowing recipients of my first adolescent rock star crush.

The Go-Go’s music has remained a constant in my adult life as the band’s unforgettable discography has been permanently etched into my psyche with irresistible and life altering earworms including: “Fading Fast,” “Get Up and Go,” “Turn to You” and “Apology” from the band’s albums Beauty and the Beat, Vacation, Talk Show and God Bless the Go-Go’s.

So, it is with great pride and sentimentality I say congratulations to Belinda Carlisle, Kathy Valentine, Gina Schock, Charlotte Caffey and Jane Wiedlin. Thank you for the music, the cherished memories and most of all for the endless hours of unbeknownst discussion fodder you’ve provided to me and my fellow Go-Go’s cohort (you know who you are, VG!) over the past four decades.

May your beauty and beats last an eternity.

The Go-Go’s have hit another milestone by being nominated to become members of the historic Rock and Roll Hall of Fame. I must confess this news excites my youthful heart as The Go-Go’s were not only my first favorite band, but also my very first rock concert and front row experience.

With masterfully crafted earworms such as: “Our Lips Are Sealed,” “Vacation,” “Head Over Heels” and “We Got the Beat,” the female fivesome made history with the historic debut album, Beauty and the Beat, which sat perched atop the Billboard 200 album chart for six consecutive weeks and selling over two million copies. The double platinum Beauty and the Beat is the first and only album by an all-female rock band to achieve this monumentally historic feat, which has yet to be repeated in the four decades since.

Although the band broke up in 1984, they reunited in 1990 and went on to record a powerful fourth album in 2001 (God Bless the Go-Go’s), which featured Green Day’s Billie Joe Armstrong on the lead-off single “Unforgiven.” The Go-Go’s have continued to tour in the following years and recorded and released a new track, “Club Zero” in 2020, as well as the critically acclaimed documentary about the band lensed by History of the Eagles director Allison Ellwood.

A long overdue oversight (eloquently echoed by a recent op-ed piece in Billboard by James Duke Mason) has now been rectified and an anticipatory congratulations is extended to Belinda Carlisle, Charlotte Caffey, Gina Schock, Kathy Valentine and Jane Wiedlin. May the magical mystical power of Apollo be bestowed upon the most successful all female rock band of all time.

To cast your vote for the RRHOF 2021 nominees click here

To read more about my obsessive fandom click the titled links below:

Beauty and the Beat 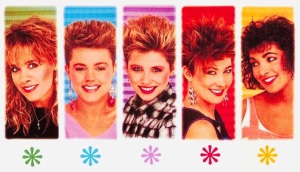 Exactly 35 years ago this week, my entire world revolved around awaiting the release of the Go-Go’s third album, Talk Show. Therefore, in celebration of this milestone, I’ve decided to pluck it from obscurity and revisit its virtues for posterity.

Talk Show hails from the heydays of when new wave and MTV ruled, all the way back to the early spring of 1984, but I can still remember it like it was yesterday. I achingly recall how the previous year had been sheer agony for myself and fellow Go-Go’s fanatics, as Belinda, Jane, Charlotte, Kathy and Gina seemed to all but disappear from the 80’s music scene, despite making a big splash with their two important and impactful releases; Vacation and Beauty and the Beat, both of which I have discussed previously (those can be found by clicking on the abovementioned album titles).

Producer Martin Rushent amped up the guitar crunch and added subtle sprinkles of piano and synths, consciously choosing to veer away from the girl group echoes of Richard Gottehrer’s previous album productions, which added a much-needed renewal to the Go-Go’s sound. Bassist Kathy Valentine handled the lion’s share of lead guitar licks due to Caffey’s battle with carpal tunnel, which added a noticeable frenetic ferocity throughout the album’s 10 tracks. Talk Show’s material was masterfully accentuated by Gina Schock’s unyielding and metronomic pounding of the drums, undeniably proving that Schock indeed, still had the beat. [Read full tribute here]

After a six-week run atop Billboard’s 200 album chart with the multi-platinum debut album Beauty and the Beat, all-girl rock group the Go-Go’s hurriedly released the follow-up sophomore effort, Vacation. Echoes of previous singles “We Got the Beat” and “Our Lips Are Sealed” could still be heard across radio airwaves when “Vacation” became the band’s third hit single in the summer of ’82. The bubbly title track was the first-ever cassette single and was accompanied by its vivid and playful music video, which revealed the band members hamming it up while pretending to be highly skilled water skiers.

The Go-Go’s second studio album started off strong, but inspiration seemed as if had been stretched thin in order to quickly release a follow-up to the band’s best-selling debut. Leftovers from the Go-Go’s earlier live setlists unfortunately found their way onto the sophomore effort, effectively diluting what could’ve been a solid track listing. The obligatory cover tune “Cool Jerk” and the subpar “Beatnik Beach” sounded like fillers included to expand upon the album’s abstract beach theme. It resulted in making the Go-Go’s second album sound as if the girls had been left scrambling for quality material. Additionally, Jane Wiedlin’s heavy reliance on Webster’s rhyming dictionary (as evidenced on “Girl of 100 Lists” and “It’s Everything but Partytime”) certainly didn’t help matters. Fortunately, Kathy Valentine was aptly able to pick up her cronies’ slack by contributing the effervescent title track, the accidently prophetic “We Don’t Get Along” and the ethereal closing ballad, “Worlds Away.” [Read Full Review]